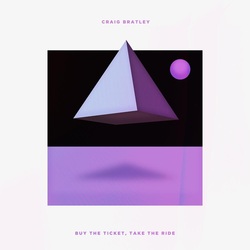 
Craig Bratley has turned up at a party. He’s brought all your favourite soundtracks, but can you dance?
There’s no punchline, but I believe he has made a rekkid that has given a shot of electronique histoire to the current flavour and more importantly texture and for these worldly ears that ain’t no bad thing.
Rubberband arpeggiated basslines abound, this sounds like your early introduction to The Sound Of Synths at times and hell fire, it laps it up.
Like a Deux Chevaux, it starts slowly and truthfully and then takes you through a Tour De Europe, swapping cars like that geezer in GTA and changing radio stations while he does the bad stuff.
Once you beat on the drum, you know the lights have gone out, there is you and your water, your “new best friend”, in the middle of some sacrosanct best saved for Manchester.
There’s joyous relief with the glam stomp of “The Curse”, guitar riffs and gated whatever making a deliriously exciting drink with a poison ring cocktail to get you on it.
Oh, and there’s kicks and snares proper. And a mountain of analogue bass in sixteenths. Boss la.