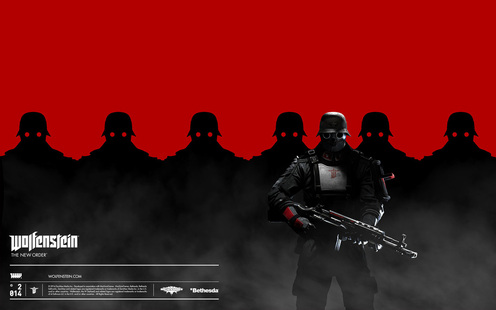 
I've been a bit lazy with my reviews for Numb of late so thought I’d better make amends with reviewing the latest installment in the Wolfenstein franchise.
Rather than going for the World War 2 set up of previous Wofenstein titles (I honestly can’t remember the full title of the last one as really didn’t impress me) Machine Games have decided to take the alternative history route, what if the Nazis had won?
The game opens in 1946 with you controlling William "B.J." Blazkowicz in a last ditch attempt to win the war which goes south pretty quickly.
The tone set from the opening level gives an idea of how the rest of the game will play out and results in our hero taking shrapnel to the head and spending the next 14 years hidden away in an asylum in Poland.
As the years roll by, we see the world moving on under the rule of the Third Reich and our hero suddenly awakes from his coma to do what he does best, killing Nazis.
Unlike other first person shooters, the main campaign is a good 15 hours worth of game play and has excellent set pieces as imagines what the world would like like had they won the war.
Lots of great humour added in to off set the grimness of certain levels, my favourite has to be in London when Blazkowicz discovers the first man on the moon was German “Nazis on the moon?....Fuck you moon”
The stealth mechanics on this game shine through and give you the choices to tackle each set piece either quietly or guns blazing.
Playing this definitely brought back memories of Resistance Fall Of Man and even a hint of Half Life.
All in all, worth your attention, y’know, until Watchdogs is released.