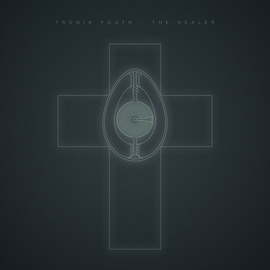 With his hugely anticipated 2nd single “The Healer” due to drop on the 18th May, Neil “Tronik Youth” Parnell has been creating a feverish drug like crazed dependency for all things Nein with his long-time friend and label partner Ian Considine. Together they have been releasing a stunning array of quality tracks by some of the best underground talent from across Europe which includes Clandestino, Jonah Considine, Two Mamarrachos, Daniele Baldelli & DJ Rocca, William Earl, Discordance, Cannibal Ink, Duncan Gray and Perdido key.

Tronik Youth starts the show with a sizzling chug fest. Neil delivers a deep beat under a starch crisp kick and keys which sit perfectly alongside a choral angelic like melody which makes way for the preaching faith healer, building throughout to a fever pitch the crazed healer calls for the claps, stabs and tweaks to heal you and put your faith the music, Immense.

Emperor Machine steps up to deliver an epic 11 minute journey through his tangled brain with a cacophony of heavily delayed and wonky elements which make way for a beautifully heavy echoed guitar riff which tips its hat to Jeff Wayne’s “Horsell Common and the Heat Ray” before driving you into a hypnotic jaunt which pulls together a dazzling array of elements which is well, just a phenomenal piece of music.

Italo disco kings Daniele Baldelli and DJ Rocca bring their own brand of tripped out cosmic funk to their mix, metallic synths dance around the originals choral melody perfectly before combining with a superbly intense and daunting guitar laden break.

El Diablos co-curator and all round top bloke Chris Massey as the name suggest brings us full on twisted acid laden dance floor belter, bringing elements of the original vocal Chris melts this inside a fierce 303 stomp which I’m sure will bring the house down when he drops it at Electric Elephant this year.

Correspondant’s Max Jones pares the original back to a positively haunting beauty. Deep chords sitting just below the familiar choral melody blend with a groove which descends into a dare I say it cinematic feeling interpretation of Tronik Youths original.

“Splinter of the Mind’s Eye” created quite a stir in February this year and as it’s been said “don’t believe the hype” but believe it with “The Healer”. Tronik Youth is going from strength to strength and with his debut album “Youth is Wasted on the Young” due this summer and an aggressive and constantly evolving release slate Tronik Youth and Nein are not only going to be dominating dance floors but DJ Charts this year and far beyond.