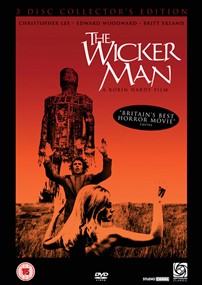 In the genre of scaring the crap out yourself, otherwise known as 'Horror', everybody has a film or two that has affected them more than most. For myself, I would be hard pressed to choose between Stanley Kubricks 'The Shining', and this seventies classic, The Wicker Man. And for those who have never seen it, and wonder what it could possibly be about; read the title. The clue is in the words.
First released in 1974, this spooky gem is now celebrating it's 40th anniversary and to mark thd occasion those clever bods at Studio Canal are releasing a limited edition on both DVD and Blu Ray, complete with the all the goodies we've come to expect from such things, including, but not exclusively, the original theatrical release, a full blown documentary about the origins of the ancient folklore and rituals that inspired the writers, and what has to be the most uncomfortable television interview that I've ever seen.
Both sets are due to hit the shelves on October 14th, but I'm thinking that they'll not be there long, so if you're a fan of deliberately freaking yourself out, you've not got long to muster the £24.99 it's going to cost you to secure your copy.
It all adds up to a must have for the discerning collector of Horror Cult Classics.
And what affected me so much? I hear you ask. Watch the last ten minutes of the film, with particular attention to Edward Woodwards facial and vocal expressions, and you'll understand why I'm not planning on visiting any Scottish Islands anytime soon. 8/10
Stephen E. Kent