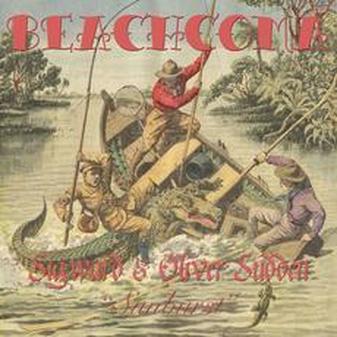 With props from Ewan Pearson, Jennifer Cardini, Heretic and Matt Walsh the new Beachcoma 12” from Sigward and Oliver Sudden would at first glance seem like a gem of a release and being a fan of Sigward’s Black Mambo EP I was looking forward to hearing what the Amateur Records duo bring when they work together.

The title track has a deceptive intro that lulls you into a false sense of security with faint then building delays which sharply collide into a bass line that punches you firmly in the chest before dying away and reintroducing a wonderfully harmonic combination of Arps and synths which combine to bring a uplifting climax to an instant winner.

Mr Sean “Hardway Bros” Johnston brings a deep grittier feel to his Hardway Bros Outer Space Interpolation interpretation with a crisp and pulsing adventure which subtly builds into an amazing segment of music. If you’re an ALFOS fan then this is a must have for your collection. Stunning work.

Finally, but no means least we have “Atma Atma” a brooding slow burner which drops wonky synths and spiralling keys into the blender and produces a strangely hypnotic and enveloping track which I personally think is a touch of genius.

Generally speaking if you ever see Sean Johnston’s name associated with a release you know that given his pedigree you won’t be disappointed and I’m not wrong here (but enough of the Hardway Bros love in). This is a quality release and I’d highly recommend it just make sure you give Sunburst and Atma Atma your time too because these tracks deserve your ears also. Quality stuff all over.