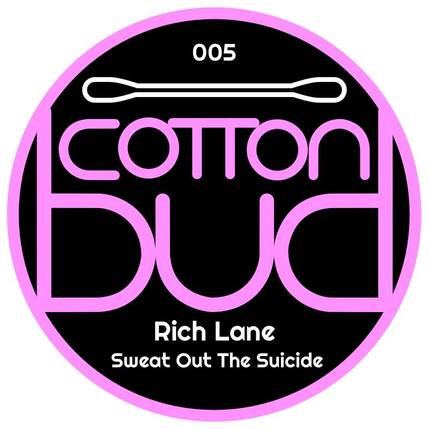 He’s been referred to as the God of Chug as well as Chug Norris but Rich Lane has a lot more about him than that. He has received acclaim and plaudits from all over the country with his trademark edits and original releases and you’ll regularly find a few Laney tracks peppering the sets of the ALFOS and VP parties (just YouTube Rich Lane ALFOS and you’ll see The Guvnor dropping Lane bombs), he recently debuted at Audio Filth to rave reviews.

Releasing across standout labels like Duncan Gray’s Tici Taci and Mr Bratley’s Magic Feet Recordings Rich also releases on his own Cotton Bud imprint which is where we find his latest release. “Sweat Out The Suicide” it’s released exclusively via Juno on July 18th consisting of an Original Mix, Dub and a Cotton Bud remix.

Sweat Out The Suicide

With an instantly infectious disco chug break consisting of crisp hats and claps and a glorious set of keys that I find reminiscent of pitched down Sylvester classic the original mix should find an instant place in peoples set lists. Pulsing throughout with live drums, bass and percussion Rich is bridging the gap across dancefloors by unleashing his funkier tendencies. Flipping the switch Chug Norris does it again.

Retaining the key elements from the original the Cotton Bud Remix is a darker affair, deeper keys and longer builds and sweet delays build anticipation while having cosmic acidic injections to heighten the dancefloor experience.

This is another winner from Mr Lane, I’ve deliberately skipped past the Dub mix that’s included in the release purely because it does exactly what it says on the tin, my personal fave if you’re interested is the Original mix, it’s such a refreshing blend of what I’ve described above as disco chug and it will tear up discerning dancefloors across the country when people get on it.

Buy “Sweat Out the Suicide” here: