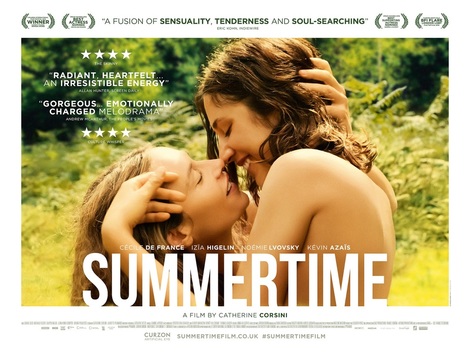 “Forbidden Love” is most definitely a well worn trait of romance movies & novels (even I know this and I can count on 1 finger the amount of times I’ve read Mills & Boon or watched a movie equivalent!) but I must admit to being pretty gripped on the same sex “forbidden” relationship between the two leads of Summertime.


A real easy set up, Delphine is a country closeted farmer’s daughter who heads to the bright lights & smoky streets of early 70’s Gay Paree (fnarr, fnarr) where she befriends Carole, a married women she meets during a women’s lib meeting….from there on they get freaky between the sheets and end up falling for each other.  Family emergency forces Delphine to move back to the sticks to look after the farm and Carole goes with her but problems set in when the country bumpkins get wind of their relationship and that age old “it’s me or the farm” dilemma soon makes itself known.


And that’s pretty much it…no twists, no turns, no finding out Bruce Willis was really dead…just an enjoyable watch that doesn’t outstay its welcome or become tedious and also features a truly touching score by Gregoire Hetzel which at times tugs on the heartstrings but doesn’t go in for warp speed schmaltz…there’s also the sounds of some really rad French jive on one particular scene ;)


Final verdict: a good Sunday afternoon flick after you get back from demolishing a Sunday roast at the local boozer.