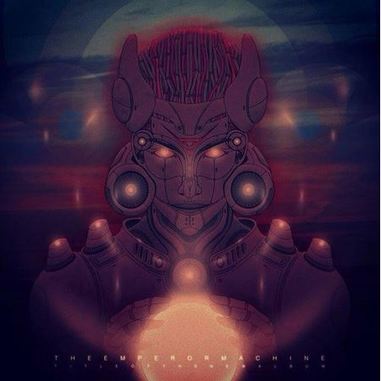 “It all started with a lengthy phone chat with Neil from Nein Records about recording a special one off Emperor Machine EP. The only brief was to stick to 107 bpm and the other around 115 bpm. I really wanted the tracks to be synth heavy, no guitars or live bass.”

That was the conversation that sparked the Love Lick EP I’ve had the pleasure of listening to.

Andy Meecham is a man who needs no introductions, but if you’re new to this game here’s a little intro:

“A man of musical delights, and enough monikers to rival his collection of synthesisers. Two stand out incarnations, we love and know, include Chicken Lips and Bizzare Inc, but it is The Emperor Machine who truly steps up and recognises no boundaries. Last year The Emperor Machine released the much anticipated album, Like A Machine (which is a compulsory purchase), the single of the same name was remixed by none other than Andrew Weatherall, and supported by an extensive live tour. The Staffordshire man has also featured on The 2 Bears album and played alongside them and Maribou State for a special Boiler Room TV session.  Mr Meecham has worked on various soundtracks for TV, film and gaming. He has also remixed the likes of Human League, Daft Punk and Royksopp. Andy’s love of vintage synthesisers combine his signature sound of disco beats with cosmic melodies. Inspired by all things kraut and prog rock, 2015 see this established name working on many new and exciting collaborations including Erol Alkan, Rodion, Polyester to name only a few.”

Love Lick is first up and is dare I say it a slow and pulsing throbber (easy) which gradually ascends with the help of sweet as drums. Keys blend and dance together to form a wonderful melody which darkens in places throughout the track. The deconstructed elements nearer the end of the track are sublime and the space feels infinite. Marvellous stuff.

Sisco Seeker is a 10 minute trip that from the start lets you know that it’s going to be a special journey, high pitched tweaks dance through a wave of analogue niceness as Mr Meecham ups the tempo with an addictive rolling groove. With so much time to play with there are multiple elements throughout and this really is an epic ride. Builds come and go, interspersed with deeper keys toying with your senses. Dancefloor Damager.

The beauty of Mr Meecham and his Emperor Machine moniker is that you just know that you’re going to get a tip top aural journey in any of his productions, you just don’t know what it’s going to sound like. Diverse in his song writing style but bang on and always hitting the spot. This pretty much like all of his releases must be in the bag, or on the usb if you’re that way inclined. Get your hands on it from Monday 14th September.