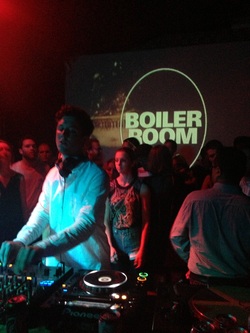 ManMakeMusic x Boiler Room
Launched in 2011 by the ever impressive George Fitzgerald ManMakeMusic is now a label certainly hitting its stride, tonight's showcase has not only proved exactly the abundance of talent the label has on it's roster but screamed it from the rooftops.

First up we have Trikk a native of Portugal, he moved to London last year and has hit the ground running, with releases on Pers Recordings as well as ManMakeMusic and a George Fitzgerald remix on Hotflush already under his belt you can expect big things from this young man.

Next is the hooded and mysterious U, playing a 30 minute live set of driving techno, this does not fail to impress, the whole set played so seamlessly live shows true craftsmanship.

Next up is current high riders Laszlo Dancehall, the duo comprised of producers Christian Piers & Leon Vynhall  have received critical acclaim a plenty with the release of their last EP Gave Up, they play a set of straight up heads down four to the floor house, electric!
Finally label boss and all round Midas touch Mr George Fitzgerald takes the stage and shows us how its done, he plays us out on a blissful 45 minute set of truly wonderful house music. Outstanding. 8/10

Check out http://boilerroom.tv/live/ to view the set for yourself