INTERVIEW: Nikki Gordon We Are FSTVL 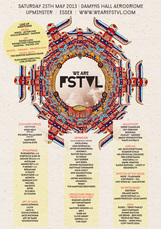 Late spring and our attention's now on thoughts of hedonistic weekends in fields across the land, attending one or more of this years ever increasing choice of festival.

Cast your mind back a few years and T In The Park, Creamfields and South West Four were the only large mainstays in the Electronic arena, but in recent years we have seen exponential growth with promoters like Eastern Electrics growing from a one off party for a few hundred to this year a full on festival for thousands spread over a weekend, the UK festival market is quite clearly in a healthy state of business
Kicking off proceedings on May 25th this year is an impetuous new kid on the block who is out to show us all exactly how it’s done; We Are FSTVL is embarking on its maiden voyage on the 25th of May 2013 with an artist line up that beggar’s belief.
A good few years have passed since its original inception and meticulous detail and strategic logistical military planning have gone into this slick, well oiled machine. Numb's Boutain caught up with veteran London club promoter and We Are FSTVL Head Honcho Nikki Gordon for a couple of beers to ask him all about We Are FSTVL

So let’s start at the beginning, where did you cut your teeth as a promoter?

I first started doing little parties around 15 odd years ago Called Natural Born Groovers with a good friend of mine in the back room of The Aquarium, we ended up doing the parties pretty much by mistake, my friend was DJ'ing at the time and was approached by a Vodka company to do a promotional party which basically all fell apart at the last minute when the vodka company pulled out, but we decided to press on and do the party anyway.  We got just £1 for every flyer handed in on the door but it was a good weekly gig and ended up getting quite busy, one particular weekend we had an Editor from Mixmag in who ended up doing a double page spread on the night, then things really picked up.

So when did putting on parties change from a sideline into a full time profession?

I only actually started taking it seriously when I was employed full time as a Promotions Manager at Neighbourhood Club (the old Subterania Club) in West London. It was Co-owned by Ben Watt from Everything But The Girl and Alan Grant who I think started Lazy Dog Sunday parties in Notting Hill Arts Club. I put on a couple events there that went really well and they offered me a job. This was when Circoloco were there, well before it ended up in The End. I was there for maybe 2 or 3 years. I got fed up doing everything – because by trade I’m a graphic designer I got lumbered with the Design / The Bookings / Marketing – doing 4 peoples jobs for one small wage. I remember I asked for about £40 more a week and got told no so I fucked off and left. Tight c****!
From there one of my friends who was the biggest promoter at the time in London offered me a job to work on TDK Cross Central. It was doing OK but needed a little kick up the arse so I come on board as part of the team and we smashed it!
From there the owner of TDK Cross Central Billy Reilly who also owned The Key / Canvas / The Cross offered me a Promotions Manager job for The Key. It was one of my favourite all time venues, and was my little baby – we had some of the best artists / brands / promoters in the world week in, week out. It was a very surreal time, like living in a different world. You would step into the complex of Goods Yard on a Friday night and all of a sudden its Monday morning, you haven’t been home and you have been to 6 or 7 raves over London too. Smelling wunderbar!
When all the clubs eventually closed down due to the lease expiring I then put on a few parties of my own independently. Then a few years later I ended up doing the Marketing for Proud2 which was the old Matter in The O2.  I left Proud2 in July 2012 as by that point I had been working on the festival for about 3 years in the background and it come to a point where I was ready to start the bookings and set the office up for it.

What other recent previous events/nights have you been involved in?

Most recently I brought Cadenza Vagabundos with Luciano to London last year which was really great, 3800 people – proper rave up. Some of the earlier ones at Neighbourhood where great, going back years I was booking people like Sneak and the secretsundaze lads. Oh and some bloke called Jamie Jones, you heard of him? Hahahaha – that one was at a boozer in Caledonian Road!

What can be expected at We Are FSTVL that isn’t available at other events, how did you up your game?

I think if you compare us against other previous local / London festivals we're offering a hundred acts spread over fifteen stages it sort of ups the game for other festivals, to be honest I got a bit addicted to the bookings!  I think because we've been the first to release our line ups this season, you can see other promoters surprise at this (not naming names) and realise, right, we can’t put just x amount of stages on this year, we're going to have to put on xxxxxx amount of stages and loads more artists too, It’s quite nice to be setting the precedent.
Also because we can run until 2:30am a lot of the other festivals in London finish between 9 and 10 at night so all of our artists are playing some nice sets.
The tents and structures involved are all completely bespoke and tailored to the event.  I think people are going to be surprised, there's a lot of big production going on, along the lines of The Secret Garden Party.

The music programming has seemed to be the main talking point for most so far, it’s pretty impressive!  Who does your programming/artist booking and what was the thinking behind booking the artists you’ve booked and the overall music policy?

I do all the bookings myself and I think basically the whole thing was driven by the want to put on a festival that I myself would want to go to.  I've been to festivals in the past and have never been that blown away so I wanted to do something really special.  So I took the approach of putting on the perfect festival and set out to try and book the best possible line up for each arena.

It’s pretty impressive that you were even able to do that, do you think that because you have an early start in the year that you managed to book all of the acts that you wanted bearing in mind you've gone head to head with Movement in Detroit?

I've got certain relationships in place for sure but you can see from our branding that we've got a great package, all of our illustrations have a real personal feel to them. It took a while to get the right balance, and when we felt happy with what we had produced, we then approached some of the agents who luckily enough loved the branding and loved the idea which certainly made things easier.
I just wanted to put something together that blew everyone else out of the water. In the end Movement in Detroit wasn’t a problem, I did think it would be – but I just cracked on and went for it bookings wise.

There is a staggering amount of quality artists in a one day period, what sort of set lengths can be expected, especially from headliners?

Sven and Ricardo are doing three hours a piece so that should be pretty special, arpiar will be playing an extended set as are Apollonia. As I said before we have the edge on the other festivals as we have an extra five hours to play with which allows artists to play for longer times, in the past at other events I have known there to be 45 minute slots booked for artists which in my book is not long enough, we want to give our artists the showcase they deserve and have some decent set timings in place.

Is this a one off event or can we expect to see more?

It’s a long term plan, we really want to grow it and expect numbers to increase next year with a view to growing it into a camping event spread over an entire weekend over the next few years.  Hopefully this year is the first of many.

What is your take on what happened at Bloc last year?  This must have raised concerns for you as a promoter, how have you addressed the problems that occurred at Bloc with We Are FSTVL?

It's a horrible thing that happened there, I wanted to cry for them to be honest, but the good thing that comes from that is that everybody learns lessons from it, our site is much larger than the site for Bloc, we have 122 acres and our queuing system has a staggering amount of lanes, so I feel we are better equipped to deal with any eventuality, Hats off to Bloc though, it’s great to see them back doing what they love.

At 2.30am when the whole thing is over I understand there are various official after parties, can you tell us a little more about these, artists playing, locations etc.

We've got Kehakuma London at Fire with Apollonia playing a six hour set also Pedro from arpiar and two very special guests which I can't reveal at this time which is running from 10pm until 10am, so a nice twelve hour after party after fifteen hours in a field!

We've also got another party at The Egg in Kings Cross with Kerri Chandler, Sascha Dive, Martinez, Sam Divine, No Artificial Colours, PBR Streetgang, Max Chapman and Lee Brinks AND we also have another at the Ministry with Roger Sanchez, plus a few more that we're currently working on, so a possible four or five after parties to go to.  There are tickets on sale right now for these with transport from the main venue if needed.

What are your personal plans for when the madness is over?

To be honest it will be straight back in the office compiling video footage from the first parties and booking the artists for the coming year, no rest for the wicked!