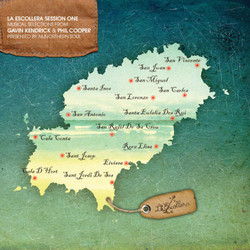 This is Es Cavallet on the west coast of Ibiza, a neighbouring beach to Salinas and a hidden Ibizencan treasure.  Here we find one of Ibiza’s best kept secrets, a restaurant; La Escollera.

La Escorella is a family owned restaurant with over twenty years in the business, both Gavin Kendrick and Phil Cooper have been invited to grace the decks there for the last few years, giving them both the musical freedom to dig deep within their extensive vinyl collections to bring forth the most obscure of hidden gems.  This type of musical freedom can only really be explored in a place like La Escollera, and here we have the compilation album to prove it.

From the outset the vibe is chilled kicking off proceedings with BJ Smith (AKA Smith & Mudd) Runnin, we know where this comp is heading.  I’m glad to say that we are treated to one of the most forward thinking Ibiza “chill out” albums in a very long time.  The long running Jockey Club Salinas Sessions have been very hit and miss over the years with only the odd incarnation hitting the spot.  Most of the other offerings always fall far from the mark.

Here we are given a really adverse interpretation of the Balearic Beat.  As is all that should be with Balearic “anything goes” and this really is true with this outstanding compilation.  Using the extensive knowledge of both Kendrick and Cooper we are really transported directly to La Escollera and their sunset sessions.  With musical styles ranging from Reggae to

This compilation literally knocks spots off the competition, I haven't enjoyed an Ibiza compilation album so much as the original Cafè Del Mar mixed by Josè Padilla back in 1994, a future classic in the making.