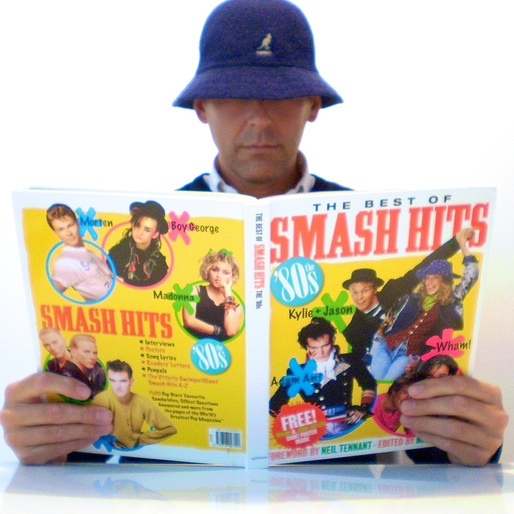 From Glasgow through to London, from Blackpool and Salford to The South Of France, this year is seeing further ascendency of a music style warmly called “Chug”, “Slo-Mo”, “Nu-Disco” and even “NEW New Beat”, these records have brought together a fervent band of merry dancers with a passion and commitment reminiscent of Northern Soul.
Across those disparate dance floors, there are certain tunes which are currently guaranteed to bring the biggest approval, and several of those have the name Rich Lane on them.
I spoke to Rich to find out how this “mild-mannered janitor” feels about this scene, his influences and plans, and the future for the music many see as a reclamation from the superstar DJ’s and super clubs, to great original venues and adore the inclusivity it brings.

With his new label Cotton Bud offering up their first release (one of his own) “Shelves” in the past few weeks, I asked this Midlands based producer why he doesn't get out so much, and feel the impact his releases are having?

“Oh, I don't know. Friday is Big Shop Night - sometimes combine it with tea at Morrison’s”.
As a Northerner myself, I see the clash of interests. It is a quality deal with Mr Wm.

“I did my fair share of nightlife when I was probably too young - late teens. And being around clubbing types professionally and socially back then sort of made me crave domestic normality by the time I was 21. Been a bit pipe and slippers ever since I suppose. Horoscope types tell me I’m a typical Cancerian, but then us Cancerians are very cynical about shite like that.

And anyway, I like pubs, which I see as an extension of home (if they’re any good).”

A man proud of his roots, an area of the country also throwing up some great music from Lee “Peza” Perry and Mark E amongst others, I was curious to see if he had shared that late Eighties musical renaissance I had.

“I’m a Black Country lad. When Shelley’s in Stoke was in it’s heyday I never actually made it there, although many friends did. I did Eclipse, Quadrant Park, Haçienda, and a fair few all nighters etc - but I was living in Wolverhampton and we had a gem of a little euphoric Rave night on Fridays called Love Revolution, similar tunes and vibe to Shelleys, just a lot more local bods and more intimate. It’s from going there that my first tune came about, got the ball rolling.”

After some discussion on the impact of The Haç, “By the time I got to the Haç it was past it’s prime - all leather trousers and pony tails”, and my tales of Mick Hucknall’s bouncers issues, I bring things to this century and ask Rich what he thinks of this current scene, and who does he see as appreciating it? He says he hasn't got an actual style, “from weird to cheese”, with a wink.

“if you mean the style that I seem to be getting a bit of attention for recently, the sort of Downtempo but Dance-y synth stuff, it seems like it comes initially from our generation of middle aged ex-ravers.

They love the sound and feel of classic House, Techno, New Beat etc, but have mellowed into a slower tempo. It also adds just enough of a sprinkling of Post Punk, Funk, Synth Pop etc to tempt in people from a wider circle too. ALFOS I suppose are nailing that, along with lots of other great DJs and producers.”

A Love From Outer Space, captained by Andrew Weatherall & Sean Johnston has defined this sound, but there are so many other great new nights and days (Nibiru ran by Messrs Terry Childs and Craig Bratley & Andy Taylor’s We Are The Sunset in London alone). Crimes Of The Future nights with Scott Fraser & Timothy J. Fairplay play a tougher set, but are also enjoying the Glasgow- London axis. Two years ago, I don’t remember my diary having so many clashes. They offer so many genres, but seem to unite a particular type of music lovers.

“I went to my first ALFOS in February and what struck me was that as well as these really nice, friendly, up for it faces from my generation were equally nice, cool younger kids too - maybe it appeals to them as it’s a sort of antidote to the faster, slicker, plastic EDM they get force fed in popular culture as being what Raving is all about? Either way, I had an ace night.”
Is there evidence of nostalgia here though? Does this era compare to anything else, with these ageing ravers and youngsters staying up late dancing, often to much more furore in the provinces?

“I get the impression there’s a vibrant Northern Soul scene with an even wider generational cross section going on which I suppose has parallels. Must be loads more.

Unfortunately for a younger generation, nostalgia could be the closest thing to ‘new’ that they’re going to get. There has been no radical musical revolution since Acid House, which was the one of my generation’s youth. Generations going back had Punk, then the 60s Counterculture, and before that Rock & Roll. Headline grabbing movements with blindingly fresh and futuristic tunes pouring out of the radio, the clubs, the record shops. Young people’s lifestyles changing overnight. Every decade for 40 years. Then, after Acid House/Rave - nothing for quarter of a century. Everything just recycling/mashing up/fusing these older movements.”

“It’s a handy onomatopoeic term that alludes to a groove that a lot of this diverse and hard to describe mid-tempo music possesses. But as soon as something has a name it could well be cursed!”

Is it accurate to say that what it has done is offer the provinces a real escape and opportunity to grow credible dance music styles and influence them? Something which for time has been the property of London tastemakers, or those emigrees that needed to be in the capital to fulfil their aspirations. The party people in The Berkeley Suite in Glasgow are certainly enjoying the fact that it has become a mecca for slowed down dancers from all over the UK.

“People are definitely travelling to these events, planning their year around them - quality not quantity. Because of that, I was worried ALFOS would be achingly cool and hipster, but it was refreshingly down to earth”.

Like a Mod with a vintage Lambretta on Exmouth seafront, Rich is proud to parade his classic analogue gear, and seems tied with this obsession with retro sounds.

"Roland have just brought out perfect digital clones of some of the classic House/Techno kit recently and it's selling like hot cakes. Going to be much more music with that particular nostalgic sound”

He doesn't have much time for the more experimental electronic musicians of the moment, quoting Anthony H Wilson, “The musicians are having way more fun than the audience are”. He is passionate about the heritage of music and the styles and innovations that have given him joy.

“I'm fascinated by the fact that, say, a Jamaican Dub tune from the mid 70s, or a 60s Psychedelic tune, or a Trax record from 1986 have a certain sonic fingerprint which is nigh on impossible to nail now. I see it as a challenge. I really do lose sleep over how to get a real drum kit sounding remotely like it does on my favourite 70s Disco tunes”.

“But I'm aware that it's probably not a healthy outlook for music in the long run”.

Opposite to this is the way Rich is using social media and the affordability of digital releases to get his music into the ears and hearts of those that matter.

“All have been really positive, which gives me a right shot of feel good juice - which feeds the creative side massively. So in that respect, it’s been a huge source of fuel, and a very pleasant surprise”.

“It’s a little unfortunate perhaps that online hype doesn’t remotely translate to cold hard cash. It can look like you’re doing pretty well when a tune has 3.5k plays on Soundcloud, lots of cool people commenting on how good it is, lots of evidence of it being played at top nights. But I can honestly say I haven’t yet made a single penny from any of it, before starting Cotton Bud last week - where I have earned enough, quite literally, for two pints and a bag of scratchings so far.”

With Cotton Bud planning further digital only releases next month and a sideways swipe at the exclusivity of vinyl snobbery, maybe many more people will provide Rich with enough for more booze and cheap bar savouries after his Friday Big Shop. And get him out dancing.

“Shelves” by Rich Lane is out now on Cotton Bud, available at Juno Downloads. The second release “A Love Divine” by Original Disco Thing (feat. Nicole Simone) is also out now.