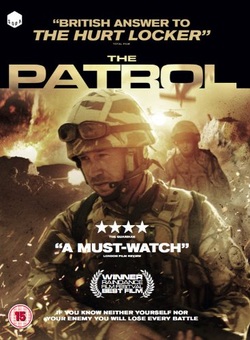 Written and directed by ex-Army officer Tom Petch, The Patrol gives an up close and personal insight into the tribulations and traumas experienced by a British Army patrol in Afghanistan.
Despite a small budget, Petch has used his directing debut to create a big impression, and confronts the viewer with a hard hitting reality of what life was like on the front line for our troops in the hostile terrain of Helmand Province.
It’s a critical look at the preventable mistakes that were made, through the eyes of the soldiers themselves. A tough and tense psychological movie, and one that needs to be seen. Especially at a time when military budgets are being cut, and many questions are being raised about the role of British forces in conflicts around the world.
It has been well documented in the press, and now The Patrol drives it home with a powerful story line and dramatic effects, how a lack of sufficient equipment in a war zone can be devastating on the morale of the troops, and ultimately their lives.
If you haven’t contemplated it already, you will certainly be left wondering why our government would send anyone to a war zone ill equipped, if not asking (as I was) why we send them there at all. If you’re one for war movies, this is definitely one for you.