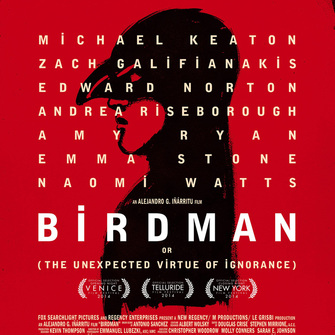 Once in a while film evolves, sometimes to a mass of publicity, because it is so drastic it almost changes the medium. (See singing in the rain?) Other times to question the generic Hollywood formula. Cause effect to further the narrative and the eye line match for continuity editing are two examples that do so in a Bout de Soufle by Godard.
The early edits totally confuse the viewer.
Why? Because Godard evolves film as he avoids the Hollywood formula. Watching Jean Paul Belmondo in Breathless is one thing, trying to place him in a time scale as he negotiates the plot?
Tarantino is another blinding example of evolving our much loved conventional film narrative.
Deconstructing the narrative in Pulp Fiction was a master stroke, and we thank the director for giving the viewer credit. Knowing that we could and would work out what was a blatantly brilliant plot, not bound by the mainstream Hollywood conventional edit
Which brings me to Birdman.
A master stroke of filmmaking leaning on the theatre with such affection and brilliantly involving it!
Unique and ground breaking cinematography, using characters and their movement to flow an edit! Brilliant.
How the director of photography and the editor planned the eventual still so beautifully balanced as to perfectly frame some poignant character dialogue!
Keaton was the part, and his balance and feel for this character flaws and all was understood by me.
Norton was brilliant as Norton is.  As was the rest of cast in what i thought was a "felt it..performance.
I did spend a degree of time studying film and was distracted because of this.
I love.
You might hate it!
But your'e wrong...