FILM - HALF OF A YELLOW SUN 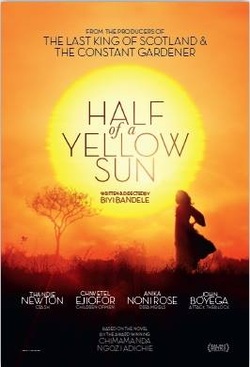 Adapted for the big screen by first time director Biyi Bandele, from Chimamanda Ngozi Adichies best-selling novel of the same name, Half of a Yellow Sun is a story of love, loyalty, strength, struggle and pride, set against the backdrop of a very dark period in Nigerian history.
You are introduced to Olanna (Thandi Newton) and her sister, Kainene (Anika Noni Rose), two strong, independent, intelligent young women, who have just returned to Nigeria after a privileged upbringing and education in England. They both make unusual choices to marry - a “revolutionary professor” Odenigbo (Chiwetel Ejifor) and an English writer Richard (Joseph Mawle) - two men who are politically opposed and tolerate rather than like each other throughout the movie. Their lives together then form the central part of the story, alongside that of Odenigbos devoted houseboy, Ugwu.

With the exception of Ugwu, all the central characters display unlikeable traits in the early stages of the movie, yet the story eventually bonds the viewer with all of them as it travels from a carefree time of fun and virtue, through unthinkable betrayal and then crashes into the brutality of civil war. As you’d expect, the war scenes are uncomfortable, but not gratuitous, just enough to make the point. It’s intense, fraught, and at times hard to watch, but then show me a powerful movie that isn’t? And it is a powerful movie. Alongside the violence, fear and injustice, this film beautifully displays the resilience of human nature, and how the power of love rises above all in times of crisis. One to watch with the girls (take tissues) or as a couple if you’re into emotional, sweeping, romantic dramas.